The calculation of the forced response of a DLIT system (see previous article) in response to u(k) input can be done by iteratively solving the difference equation of order n, or by resorting to the discrete convolution of the input with the impulse response of the system.

If the latter is not available, it can be derived by iteratively solving the difference equation with an input u(k)=δ(k) and null inputs and outputs for k<0.

In the case where the initial conditions are not null, it is possible to obtain y(k), given the sequence u(k) and the N values of the output prior to the instant k = 0, with a procedure very similar to that used for the solution of linear differential equations with constant coefficients for continuous systems over time.

Forced response and free-evolution of system

For the linearity of the system, you can consider the output y(k), for k≥0, as the sum of the forced response to the input signal starting from -M, and the free-evolution of the system, that is, u(k)=0 for every k and y(-1), y(-2), … y(-N) equal to the given initial values, namely:

can be calculated with:

This is called the associated homogeneous equation.

The general solution of the associated homogeneous equation is constructed from the roots of the characteristic equation:

If p is a simple root of the characteristic equation, it is easy to verify that the sequence

If C(λ)=0 has N distinct roots, the general solution of the homogeneous equation is given by the linear combination of linearly independent sequences

shall be calculated so that y(k) assumes the values given in k=-1….-N.

Case of root with multiplicity r and complex roots

In the case that the root p has multiplicity r, it contributes to the general solution

with the linear combination of r linearly independent sequences:

For r=3, we get the sequences

and the characteristic equation:

which has a single simple root a. The general solution then becomes:

If one wishes to evaluate the free evolution from the initial condition y(-1)=0.7, the coefficient c must be calculated so that:

We can also proceed through the calculation of the impulse response of the system. We can derive h(k) from the difference equation and it is:

The total response y(k), starting from a given value of y(-1) and with generic input u(k), is given by:

where the second term represents the forced response

it converges to the value

the response is monotonous increasing, while for

the response is oscillatory, as shown in the following figures in which (b=1-a) has been placed. 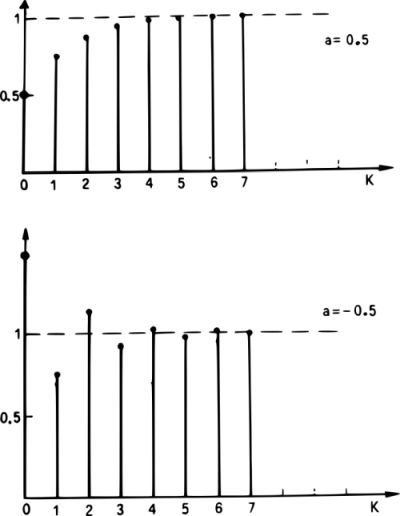 To evaluate the samples h(k) we place in input a pulse: u(0)=δ(0)=1 and solve iteratively: 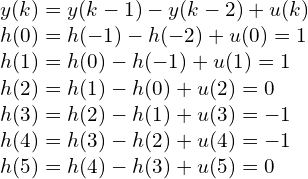 Iterative solution and comparison with the previous solution

we iteratively perform the calculation of the response and compare it with the previous solution, remembering [1]. 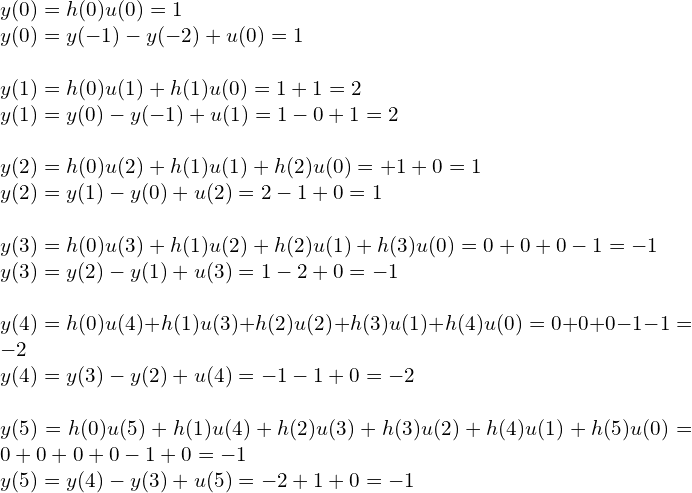 As we can see, the results of the two methods coincide.

A PID controller consists of the proportional, integral, and derivative blocks connected in parallel. It brings together the characteristics of its building blocks and can […]

This motor is frequently used in control systems as it is quite easy to control its rotational speed. […]

The quantization error can be interpreted as a noise that overlaps the original signal. […]