Optimal characteristics for a transducer

To discuss the operation of temperature transducers, we will proceed directly to illustrate some fundamental commercial transducers, without however going too far into the infinite variations that exist of each model.

The PT100 transducer, also called RTD thermoresistance, is a precision resistance whose RT value is a function of temperature T. 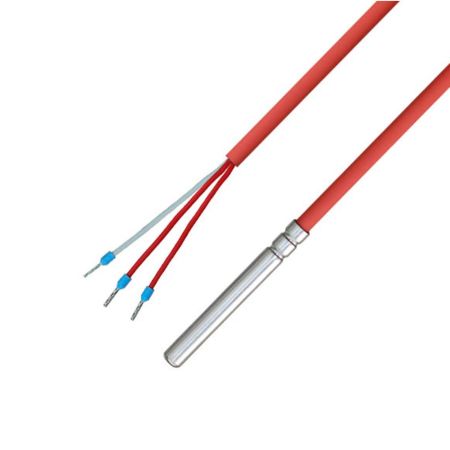 In general, the nominal value of the resistance of the device is 100 Ω. The RT/T characteristic is linear and increasing:

In practice, it will be necessary to perform a resistance/voltage conversion. For example, below is an RT/V converter that uses a constant current generator. In this scheme, a voltage regulator is used LM317, capable of delivering a current I≥ 10 mA.

The constant current intensity is equal to:

We realize a conditioning circuit for a PT100 temperature transducer able to provide an output voltage between 0 and 5 V when the temperature T varies in the range 0-50 °C.In the proposed shema the integrated INA111 is proposed.

Assuming that the output current from the operational is I=2 mA, each branch of the Wheatstone Bridge is crossed by a current of 1 mA such as not to self-heat the RT resistance thermometers.

In the hypothesis that the CA3140 amplifier can be considered ideal, from the circuit represented in the figure we obtain:

The G gain of the INA111 amplifier and the RG resistance are:

It is possible to perform the calibration of the circuit with this procedure:

About TG Team 60 Articles
We are the TG magazine editorial team, a unique pool of copywriters and engineers to get you through technologies and their impact on your business. Need our expertise for an article or white paper?

Pipelined ADC converters have become the predominant architecture for ADCs with resolutions of 8-14 bits and conversion rates of 10-200MS/s. […]